Showing posts from July, 2018
Show All

By Purple Owl - July 28, 2018
Every individual goes through different phases of life. I strongly believe that it is more so after a personal loss. What I am listing out here is what I have gone through. It may be similar in case of others. Phase One is Denial Of Reality. This happens immediately after the loss occurs. Its like "No, it is not true" or "It cannot happen to me" or "My so and so is very much alive". Its a phase where both the heart and mind refuse to accept that such a loss has occurred in the first place. After my husband's death I refused to accept the same by constantly telling myself that he was away on a job where no channel of communication existed. No, I had not gone bonkers but since I was five months pregnant with a baby, my priority at that point of time was to ensure my negative emotions do not affect the baby's development. On top of it I had a toddler to handle as well. Did it help me? To some extent yes because my baby was born normal without any a
Read more

By Purple Owl - July 21, 2018
Where do I start my story? Should I begin from the day it all happened or the day I had a premonition? Well...lets keep the latter for another day. It was one of those comfortable months in a small town of Tamil Nadu where people went about their businesses quietly. I was a happy working woman. In fact, I couldn’t have been happier. I was working in an organization which was my extended family, had been married to the man I loved since past six years, had a naughty little four and half year old to run behind and was  five months pregnant with our second baby. I was on cloud nine. Which woman wouldn’t be???  On top of it, I was now walking, rather rolling, like an unguided ball due to my baby bump. Like always, reached my office and immersed myself into a long-pending file. My phone rang and my heart skipped beats. He always had this effect on me even after six years of marriage. We spoke for a few minutes as he was in a hurry to go for his sortie. I never knew that it was the last
Read more

By Purple Owl - July 14, 2018
I started this blog as a virtual diary for penning my thoughts so that I can heal myself. Who am I? Well...the world calls me a widow, the forces call me a war widow, but I call myself a married woman whose husband is now in a place akin to Alice's Wonderland. It could even be Peter Pan's Neverland for all I care. The bottom line is that we no longer physically live together because of unforseen circumstances or as is popular in the forces "due to service exigencies". Do I regret the kind of life I am presently living? To be brutally honest, YES, I mean, who likes to move around amidst people with their eyes either filled with pity  (as in "poor thing") or sarcasm (as in "look at her!!! No shame and no remorse!!!). Or its at times lust whereby people think that I am readily available to toy around with since I have "no strings attached" now. Well, its been six years and attitudes of majority is yet to change.  Yet, I have now stopped bother
Read more
More posts 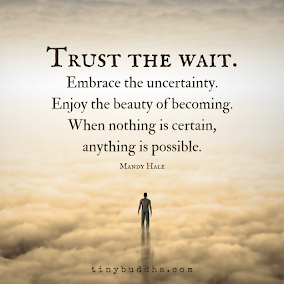